This is a continuation of our blog series ending of the tragedy of the commons via on the scaling of Ostroms rules for successfully governing decentralised organisations. Ostroms sixth rule for designing decentralized organizations requires the use of graduated sanctions for rule violators and existing blockchain alternate in their approach to complying with this rule.

Bitcoin relies on the strict enforcement of on chain rules to make it impossible for on chain rule violations to occur. Arguably, this is sufficient for bitcoin due to its simple use case as money and the fact that it is a largely self-contained ecosystem. Bitcoins blockchain doesn’t need to programmatically make decisions on behalf of other applications, it just does what it is commanded to do and the networks of stakeholders in the bitcoin ecosystem have a primary objective of ensuring it does so.

For other Proof of Work Blockchains such as Ethereum, Ostroms rule is more problematic. Although these can act as a pure cryptocurrency, and when they do so the same argument applies, their purpose of being a general purpose smart contract platforms introduces far greater complexity. “The DAO” was the very first attempt at a decentralized autonomous organization, it operated on the Ethereum network and failed when members hacked it and drained it of funds. Although it is arguable that had Ethereum been bug free, and forced compliance with the intent of its rules, that there would be no need for sanctions to discourage the DAO hack perpetrators, it is also arguable that DAOs will be required to interact with the real economy and the inability of Ethereum to disincentives DAO and smart contract rule violation is a significant vulnerability. These DAOs will be reliant on Oracles to input truths from the real economy into a blockchain. To ensure resistance from third parties these oracles will need to be part of a decentralized network, be incented to act within the rules of the system and penalized for acting outside the rules.

Delegated Proof of Stake (DPOS) blockchains such as Tezos provide an example of how this can be done at a protocol layer. Tezos requires block validators to stake a bond in the underlying cryptocurrency that may be forfeited should they act outside the protocols rules and reward the block validators for acting within the rules – such as including legitimate transactions in the blockchain. Although this mechanism cannot currently be leveraged for use by a Oracles operating on top of the blockchain, it is arguable that it is a required. Firstly, for incentives and penalties to be effective they would have to have a value that is recognized by the Oracles and members of the DAO and by far the best way to achieve this is by using the underlying cryptocurrency as the source of value. Alternatives, such as the issuance of a separate token within an Oracle type DAO on top of the blockchain relies on the DAO attracting value for future utility that it can use to incent oracles to participate. This is a challenging thing to bootstrap, especially if an Oracle DAO is an infrastructure service to other DAOs that are providing the utility that is valued. This is a likely scenario, for example predictions markets have been proposed as part of a Futachy type governance and these will require inputs on prices from off chain markets. It is arguable that an effective decentralized Oracle network is required to ensure these inputs cannot be censored and the Futarchy is resilient to outside influences. Under this scenario, the predictions market is the utility that members will value, even though it requires the oracle network to operate.

It is difficult to escape the interdependencies between oracles, identity and reputations and that these are all infrastructure type services that both future DAOs and protocol level service will require. Furthermore, it is also apparent that as services participation in these would be best incentivised by the value provided by the underlying cryptocurrency. As such it is arguable that all these services should operate at the protocol level, with incentives provided by the hosting blockchain. A potential model to achieve such an outcome is a core blockchain that utilise side chains for each required function, incentivising the use of these with its own cryptocurrency. A very rough concept is that a Tezos type DPOS blockchain could also host and subsidise both oracle and reputations side chain that leverage existing block validators to provide security and process transactions and which also incentivises members participation in their respective real world interfacing applications and which requires the staking refundable deposits. 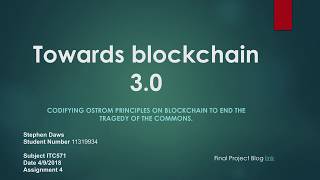